Overview of the Bible – Part 3

The final section of our overview of Scripture is the culmination of God’s plan – the most exciting part of the story! The Bible timeline has covered more than two thousand years, but these final five sections begin to accelerate God’s story following the exile of the Jews to Babylon.

The Bible’s Storyline Comes to a Conclusion…

11. The Restoration: When the king of Persia defeated Babylon, he allowed the Jews to return home (539 BC), just as God had said. Many stayed behind, but those who went back rebuilt the temple and tried to follow God. They were a tiny fraction of what they had been, and they struggled in many ways. God sent a few prophets to encourage them, but then the prophetic voice ceased (430 BC).

12. The Silent Years: Like a dramatic pause, the Bible is silent for hundreds of years before the arrival of Christ. God’s people were back in the Promised Land, but they were under Persian rule. Then they were ruled by the Greeks. Then they won their independence for about a hundred years. But by the time of Christ they were under Roman rule, and longed to be free again.

13. The Christ: For God so loved the world that he gave his one and only Son, that whoever believes in him shall not perish but have eternal life (John 3:16). Jesus lived a sinless life, but was crucified by his enemies (AD 30). He was laid in a tomb, but rose from the dead three days later. Through his life, death and resurrection, Jesus reversed the curse of sin and death for all who believe in him.

14. The Church: After Jesus rose from the dead, he told his followers to make disciples of all nations (Matthew 28:19). The Apostle Peter preached on the day of Pentecost, and three thousand believed (Acts 2:41). The Apostle Paul started numerous churches, and took the gospel all the way to Rome (Acts 28:16). The church continues to preach the gospel, and today, nearly a third of all people are professing Christians.

15. The Return: Jesus will return at an undisclosed time to judge the living and the dead (1 Peter 4:5). To some he will say, Come, you who are blessed by my Father; take your inheritance, the kingdom prepared for you since the creation of the world (Matthew 25:34). To the rest he will say, Depart from me, you who are cursed, into the eternal fire prepared for the devil and his angels (Matthew 25:41).

The Bible is a record of the most amazing story ever told, and it just happens to be true.  Understanding God’s Word is much easier – and richer – with a clear understanding that the arc of God’s story begins and ends with the promise of restoration after mankind’s falling away from God.  This brief summary demonstrates the arc of God’s plan throughout history up to the point of Christ’s birth, death and resurrection.  And it gives us an exciting look ahead when the restoration will become complete upon the Savior’s triumphant return!

By Shane W. Houle, Director of Scripture Engagement, Bibles For The World

Learn the Bible in a Year! 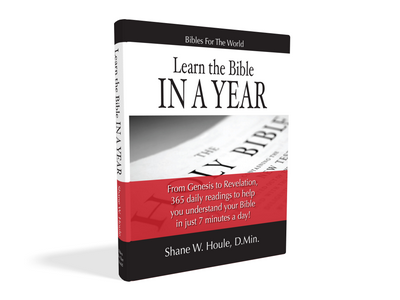 You can learn the ENTIRE Bible in a year with a daily synopsis of key Scripture passages, the events that lead from the Beginning through the final days described in Revelation. You can sample Shane Houle’s Learn the Bible in a Year for 30 days FREE! CLICK HERE TO LEARN MORE!